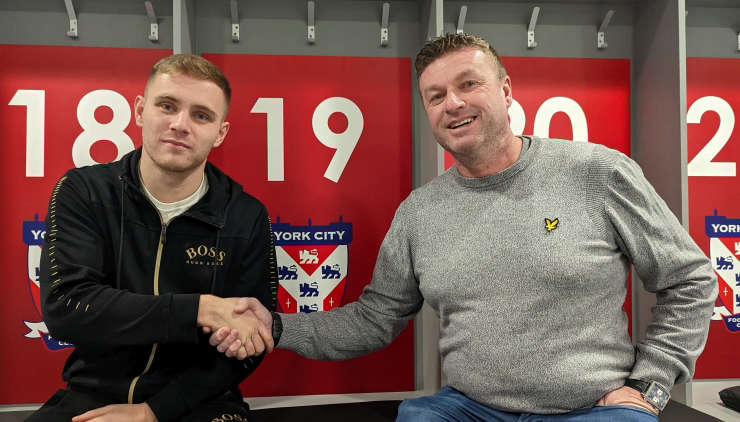 York City Football Club are delighted to confirm that midfielder Dan Pybus has signed a two and a half-year contract with the club.

York City confirmed today that midfielder Dan Pybus has committed his future to the club by signing a two and half year deal, one which will keep him in North Yorkshire until 2025.

The 25-year-old originally joined the Minstermen in early August 2022, prior to the National League curtain-raiser at home to Woking.

Arriving as a free agent, Pybus had spent the previous three years playing in Scotland, counting the likes of Scottish Championship outfits Queen of the South and Dunfermline Athletic as his former clubs.

In advance of his time in Scotland, the former-England U17 star had rotated around multiple clubs in the North of his home country, plying his trade with Bradford City, Bradford Park Avenue and Blyth Spartans, before moving abroad to Norwegian club Tønsberg.

He made a positive impression right from the off at York, quickly etching himself into the fabric of the midfield.

Pybus has since started every league game this season, one of only two players to do so. Across the 26 that he has been ever-present in this campaign, he has defined as a fans' favourite, with his ball-winning and passing attributes no match for any opposition.

This news will come as a disappointment to fans of various League Two clubs, who have been allegedly linked with Pybus from November, including Crewe Alexandra, Doncaster Rovers and Leyton Orient.

Following the agreement of the new contract for Pybus, York City chairman Glen Henderson spoke to club media: “I’m really pleased that Dan has decided to commit to the club for the next two and a half years.

“Dan was the first player that I was involved in signing and I think everybody has been impressed with how his time at York has turned out so far."

Henderson had joined the club in early July, about a month before his involvement in the deal which brought Pybus to the LNER Community Stadium.

"He has become a key part of our squad and it was a no brainer to try and extend his time at the club," added the chairman.

“He is a true professional and has all the characteristics that our football club is all about. He’s a player that fits our vision for the club and I’m glad that he has decided to move forward with us.”

The Minstermen's next game is a break from league action, when they host Chelmsford City in the Isuzu FA Trophy this Saturday.