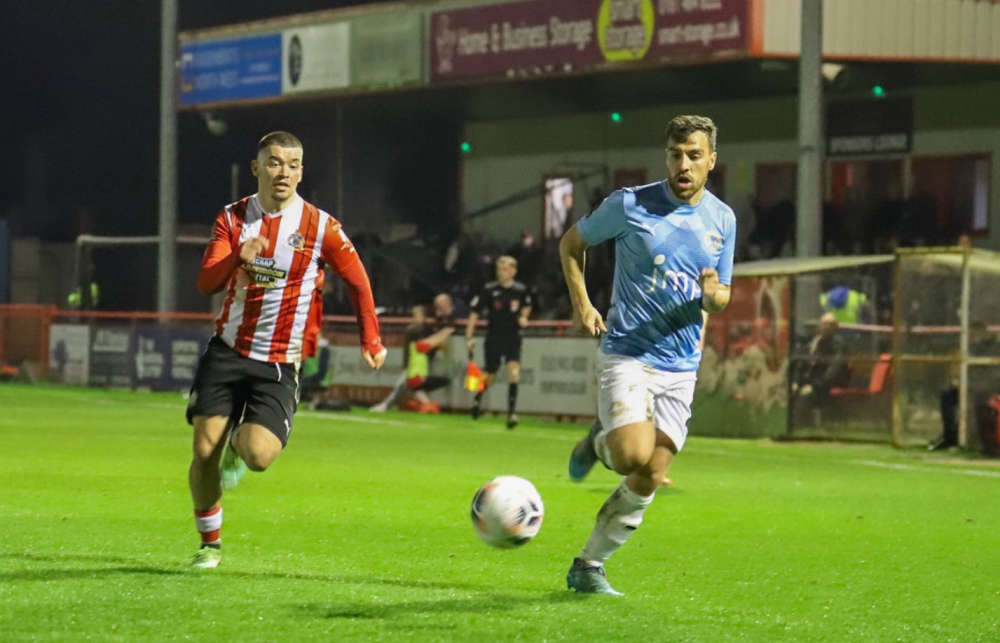 ​​​​​​​Altrincham came back from a goal down against York, to claim all three points in front of the BT cameras.

Altrincham came back from a goal down against York, to claim all three points in front of the BT cameras.

In a match where both teams were looking for a long-awaited win, York drew first blood, as Maxim Kouogun headed home a knock back, from a corner.

The opener was cancelled out by an unmarked Elliot Newby, who levelled shortly into the second half, tapping in a lofted cross.

Altrincham's comeback was completed with 16 minutes to play, as Ryan Colclough finished off a good team move, smashing home.

Following a third straight National League defeat for Altrincham, just a single change was made, with suspended Ross Barrows exiting the squad, to make way for Toby Mullarkey, returning from injury.

York City manager John Askey made three alterations to his starting lineup, as Alex Hurst, Maziar Kouhyar, and Maxim Kouogun all came back in, forcing Luke James and Fraser Kerr to the bench, while Ryan Fallowfield dropped out completely.

It took 15 minutes for either team to really get going, and it was the Minstermen who managed to break the deadlock early on. A deep corner from Alex Whittle found the head of fellow full-back Michael Duckworth, who headed back across goal for Kouogun to nod home from close range, the 'keeper's punch not enough to stop it from going in.

Altrincham's immediate efforts to reply weren't good enough, as York stopper Ethan Ross found Chris Conn-Clarke's long range shot an easy claim, before a corner was knocked goalward, but yet again, the looping header was a simple catch for Ross.

Approaching the half-hour mark, Olly Dyson picked up the ball for the visitors about 25 yards from the Alty goal, and tried his luck with an effort that fizzed slightly wide of the target.

The preceding chance might not have been the easiest to pull off, but a certain Lenell John-Lewis really should have doubled City's lead, despite a tight angle, however he somehow managed to blaze it into Row Z, from the left of goal on his first touch.

That was a big let-off for the hosts, who went on to have two great chances themself towards the end of the half.

Mullarkey's burst forward resulted in his driven shot narrowly evading the far post, then the last opportunity of the first 45 saw the ball fall to Conn-Clarke in space, inside the box, but the decision to take a touch allowed Ross to rush out and make a fantastic save to deny the midfielder.

Six minutes into the second half, a period of possession for York gave Kouhyar the ball on the edge of the area, who dummied his man and curled one towards goal, an important block from the Robins turning it over for a corner.

Just a couple of minutes later, a game tilted in the Minstermen's favour was soon balanced out by loan man Elliot Newby, who made no mistake in tapping home, completely unmarked, from an Eddy Jones cross.

A corner from Kouhyar at the other end may have looked as though the chance was over, but the inswinger from the winger almost went straight in, connecting with the top of the crossbar before going out for a goal kick.

Ryan Colclough wasn't far off giving Alty the lead, as he cut inside from the byline, beating Duckworth and firing a powerful effort towards Ross, who pounced on it well.

It wasn't long before Colclough really did make John Askey's side pay, following some brilliant team play. Connor Jennings played the ball forward to Newby, then he smartly passed it through to Colclough, who finished the move by smashing into the back of the net to complete the comeback, 14 minutes from time.

Two late chances were conjured up in added time by the visitors, but Fraser Kerr's wide header and John-Lewis strike that sailed narrowly over the top wasn't enough to save them from defeat, giving Altrincham a much-needed three points to move them further away from the relegation zone.

York City, on the other hand, recorded their sixth consecutive game without a win, that keeps them in 12th, but slowly drifting further away from the playoffs. The Minstermen return home to the LNER Community Stadium next Saturday, when Wealdstone pay a visit (3pm).