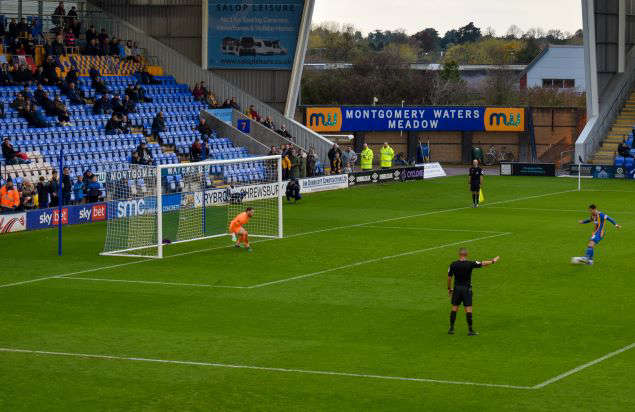 Shrewsbury's Luke Leahy puts his side two goals up from the spot Photo: Ryan Brookes

York City exited the Emirates FA Cup at the First Round stage, following a narrow 2-1 defeat at EFL side Shrewsbury Town.

York City exited the Emirates FA Cup at the First Round stage, following a narrow 2-1 defeat at EFL side Shrewsbury Town.

Shrewsbury began their FA Cup journey at home against lower league York City, and got off to the best possible start, taking the lead after just 70 seconds, with Jordan Shipley the scorer.

In first half injury time, Town made it two times worse for their opponents, converting a penalty to give them a clear advantage.

The first half wasn't done there though - York's Manny Duku headed home to halve the deficit, going into the break.

Neither side could impact the second forty-five, which ended goalless, and the 2-1 scoreline saw Shrewsbury progress.

Salop didn't hesitate in giving York a taste of their League One supremacy, as they found themselves a goal ahead after just two minutes. Tom Bayliss' run down the left resulted in a low cross into the poaching Jordan Shipley, who made no mistake in tapping home into an open net from close range.

The visitors almost instantaneously went down the other end, and were close to cancelling out the early opener, as Gus Mafuta played in Ryan Fallowfield, however 'keeper Marko Marosi was quick to get off his line and cleverly block the right-back's effort out of danger.

City shot-stopper Ethan Ross was then forced into two decent saves, as Shrewsbury regained their momentum 17 minutes in - Rekeil Pyke burst through the York defence, and with just the 'keeper to beat, he couldn't convert, Ross remaining big and blocking with his body.

York's number one pulled off an even better save a couple of minutes later, flying into a diving stop to deny a fierce effort from Christian Saydee.

Town had been well on top for majorities of the first half, and it was once again Pyke who came close to doubling their lead, heading wide from a Shipley cross, before Tom Flanagan struck into Row Z from the edge, both either side of the 30 minute mark.

A rare chance for the Minstermen saw Alex Whittle curl one well wide of goal, then Shrewsbury returned to dominance, with Saydee shooting from inside the area, but the effort was tame and straight at Ross.

Matt Pennington watched his long range strike fly over, and that was about all for regular time in the first half.

The five minutes added on though, proved to be more entertaining than the half itself.

Almost on cue with the injury time announcement, Flanagan, encroaching the 18-yard box, was recklessly hacked down by York striker Manny Duku, resulting in a penalty for Salop, and a chance to go two up.

The hosts took their chance well, as captain Luke Leahy stepped up to send Ross the wrong way, whilst he coolly slotted into the bottom right corner.

The travelling contingent of 540 might have thought they were down and out of the contest, however Duku gave them hope in the fourth minute of added time, heading home from a cross on the left.

The late first half goal was one that boosted morale in the away side, as they came out and started the second period with good momentum.

Though it was Shrewsbury who had the first proper chance 11 minutes in. The ball was driven in from the left, taking a nick off Pyke on the way through to Ross, not enough to guide it into the net.

Nine minutes later, substitute Rob Street found the ball at his feet in front of goal, and in a position where he looked destined to score from, tried his luck straight at the York stopper, who made a good block to deny him.

A sense of desperation formed within the Minstermen - Olly Dyson came on in the attempt to salvage something, and nearly did, as his distanced low strike was almost fumbled by 'keeper Marosi, who quickly recovered.

Weakened in the second half, Salop suffered some nervy moments, most significantly 11 minutes from time when a cross found a leaping Duku, but his header was unable to be kept down, sailing just inches over the bar.

Most of the Montgomery Waters Meadow was bewildered to how the game had not been put to bed deep into stoppage time, as multiple bodies in the box for York managed to prevent a third for the hosts.

One last push for the Minstermen saw Fraser Kerr head down towards goal, but it just wasn't to be, as Marosi pounced and held, the last action of the tie.

The 2-1 win means Shrewsbury advance to the Second Round of the Emirates FA Cup, the draw taking place live on BBC2 on Monday evening.